I was born and raised in Gresham, Wisconsin, which is close to Shawano. I graduated from Gresham High School. My undergraduate degree is a Bachelor of Arts in Accounting from UW-Green Bay. After college, I worked for the Federal Government (Office of the Comptroller of the Currency-OCC) for one year in Rockford, Illinois, as a national bank examiner. After leaving the OCC, I went to Mundelein Seminary in Northern Illinois and studied for five years for the priesthood. I was ordained in 1996 and immediately served as an associate pastor at Holy Cross in Kaukauna. After four years, I was made the administrator of Sacred Heart Parish in Manitowoc. After five years at Sacred Heart, the six parishes in Manitowoc were consolidated into one parish and I became an associate pastor again in the new parish of St. Francis of Assisi. In January 2007, I became the pastor at St. Nicholas Parish in Freedom. I remained at St. Nicholas until September 2012, when I moved here to Ss. Edward & Isidore Parish. 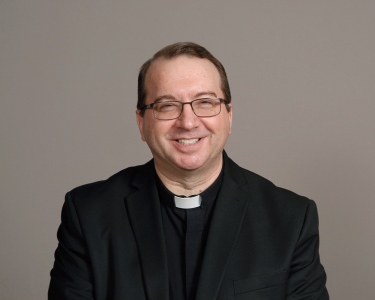